Larry Kratka is the host and producer of Nothing But Old 45s and a seasoned U.S. broadcaster that has literally PLAYED most of the songs you hear on the show when he was on the air at radio stations from Massachusetts to Florida. 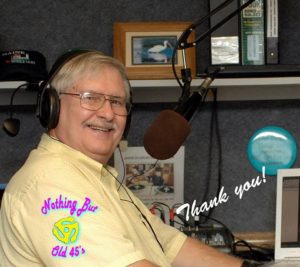 The Connecticut native was the kid who would be playing records at school dances and that translated to a long career in broadcasting and as a mobile DJ. Among the many radio stations he has worked at are WBEC-AM-FM and WUPE-AM-FM in Pittsfield, MA where he spent 28 years on the air. In his spare time, Larry is a ham radio operator who has contacted people all over the world. He is also an award-winning photographer with a number of photo exhibitions to his credit.